“For both my Tiwi people and my global family I want culture to be strong. If you don’t have culture, you fall and have to fight to reconnect. Without culture we are all lost…I hold the Western and Aboriginal law in my hands for all mankind to be equal. I have to balance both laws. I have been through many obstacles in order for my words to be heard.”

He expresses his views on equality, culture, art and language through painting, writing and song.

Johnathon’s ochre paintings present a unique combination of Tiwi culture and his personal views on global politics, family and cultural heritage. He adopts some painting techniques that reflect jilamara (Tiwi body paint design) and combines them with representations of political figureheads, stories of colonial crimes against indigenous people or adaptations of old anthropological images made of the Tiwi.

“I hope my artwork gives a glimpse into my strong beliefs of a want for world peace and equality for all humankind.”

Johnathon Bush (Jon Jon) lived for many years in Borroloola working as a stockman at an outstation herding horse and cattle. Jon Jon’s father is from Borroloola and his mother is from Milikapiti. Jon Jon moved back to Milikapiti to be with his mother’s family and to spend time with his daughter. He started working at Jilamara Arts and Crafts Association in 2015. 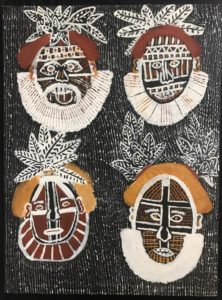